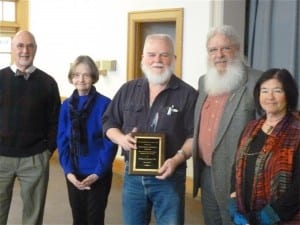 Bill Devlin accepts the Campion Award with past awardees

On Sunday, March 8th, the Springfield Preservation Trust held its Annual Meeting at historic South Congregational Church in downtown Springfield.  The weather held out and we had a great turnout. The 2014 annual meeting minutes were adopted and 2015 Board of Directors elected. President Don Courtemanche gave a review of the previous years’ activities and presented the 2015 Most Endangered List. Bob McCarroll gave an update on the historic properties located within the MGM Casino footprint and Bill Devlin, AIA, gave a presentation on the projects that he has been involved with over the last several decades in Springfield.  Many of the historic assets we have grown to love and treasure are still around due to Bill’s love of what he does.

The highlight of the meeting was the presentation of the Donald E. Campion Award for Outstanding Achievement in Historic preservation to William J. Devlin, AIA, in recognition of his contribution to the Springfield Preservation Trust and the City of Springfield.

The most prestigious award given by the Springfield Preservation Trust, is named after an early pioneer of preservation in Springfield and one of the founding members of this organization. In the Trust’s 40 year history, this award has been presented only a dozen times (pictured with Bill are some of the prior recipients). 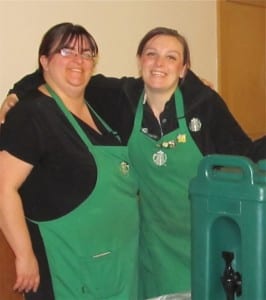 Mr. Devlin has served the interests of preservation for more than thirty years in Springfield with his architectural skills. His work includes new homes that fit into historic neighborhoods and readapted houses and fire stations for new uses. He has consulted often on issues relating to design and preservation and has served on the Springfield Historical Commission. Mr. Devlin was the architect responsible for plans and oversight of work which saved the Springfield Female Seminary at 77 Maple Street. In addition, he has volunteered on many Trust projects and events.

His ever generous nature has contributed to the organizations vitality and strength. We honor and thank Bill for his years of contributions to Springfield’s history and architecture.

Special thanks go to South Church for hosting the event and making sure the parking lot was clear of snow.  Trust Board member Bob Louder did a great job (as always) of providing tasty treats for the crowd.And finally, a huge shout out to our local Starbucks for providing some high octane hot refreshments.  Cheers to a terrific Annual Meeting and to a prosperous 2015!