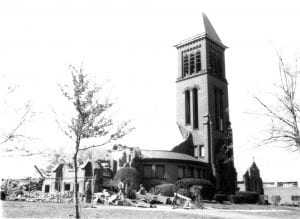 The landmark brick church burned in the 1970s, was demolished, and replaced by a contemporary facility. Only its c. 1925 Parish Hall wing remains.

Chapman Valve began operations in the 1870s and grew over the years into a sprawling complex. It has since been demolished.

James Rumrill located his gold chain mill here in 1870, followed by a series of knit-wear factories. The complex was vacant for several years; there were proposals to renovate it to artists’ housing but it burned in a fire and was demolished. 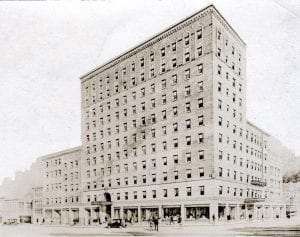 Justin Cooley established a hotel at this location in 1849, soon after the railroad arrived in Springfield. It was enlarged several times, culminating with an 11-story fireproof tower opening in 1928. The hotel was renamed the Hotel Charles to honor its new owner. Over the years, it became a residential hotel. Plans were made to renovate it for housing. Unfortunately, the 4-story 1890 and 6-story 1904 portions burned in the 1990s. The tower was demolished in the early 20th century.

The area off Main Street was once a picnic grove called Outing Park. The prolific local building firm of Gagnier and Angers purchased and developed the property into what would become the largest, most unified apartment neighborhood in New England outside of Boston. No longer fashionable by the 1980s, nearly half of the 42 buildings were demolished by an urban renewal for “density reduction.” The remaining buildings are being renovated. 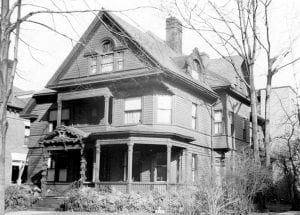 The Colonial Revival style home was gifted to the Springfield Museums but they had no use for it and allowed it to deteriorate. When the Historical Commission ruled that the home could be demolished because properties owned by the Museums and Roman Catholic Bishop were exempt from controls, the Preservation Trust sought an injunction. The injunction was denied and the home was demolished. The Trust then sued and won a ruling that properties acquired since the creation of the District by the Museums or Bishop, were not exempt from control.