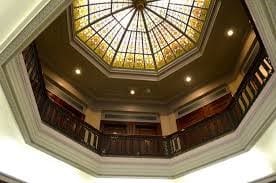 Dome in the lobby of the United Electric Company building

On March 19, MGM met with the Springfield Historical Commission and made several new proposals for the four historic properties under discussion.

MGM has proposed to recreate most, but not all, of the United Electric Company lobby in a prominent location at the top of an escalator in its hotel. Character-defining elements would be reused or replicated. Five of the eight archways would remain. The SHC voted unanimously to support the concept and work with MGM on final designs.

MGM proposed to retain and restore the Main Street façade of Union House and the first window bay of the Bliss Street elevation. More traditional storefront configurations would be installed, windows on the second floors would be returned to their 19th century configuration, and all upper floor windows would be six-over-six grid patter. MGM agreed to explore the possibility of retaining more of the Bliss Street façade. The SHC voted unanimously to support the concept and work with MGM on final designs.

MGM continued to propose keeping the granite front section of the State Armory and removing the brick rear section. MGM would add a deck-like structure to the rear and would imitate the former drill shed roof trusses over the skating rink plaza. The SHC voted 5 to 1 to support the concept and work with MGM on final designs.

MGM continued to propose demolishing the entire YWCA building but recreating much of the façade in front of its cinema complex at the foot of Howard Street, where it would be visible from Main Street. A motion to support the concept and work with MGM on final designs failed on a tie vote of 3 to 3.

The SHC voted unanimously that MGM should grant exterior preservation restrictions in perpetuity to the Massachusetts Historical Commission on historic buildings or facades that will remain within the project area.