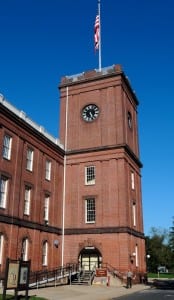 “Got A Minute?” That’s the title of the Springfield Armory Alliance’s fundraising campaign to raise $12,000.

The four 165-year-old clocks atop the Springfield Armory’s National Historic Site’s Main Arsenal (Museum) have been stuck at 4:30 (we are not sure if that’s AM or PM) for many, many years due to aging, rust, and weather conditions. These are among the few remaining government owned clocks in the City of Springfield with the common factor being that none of them are able work. In essence, time has stood still. It’s about time, literally, to get the clock hands moving and the bells ringing. Springfield Armory Alliance is the new non-profit agency that supports the Springfield Armory. One of the Alliance’s key missions is to help to fund projects that federal dollars cannot pay for. In fact, the Alliance’s very first project will be “Got A Minute?”

The four beautiful historic clocks, one on each side of the tower, are in disrepair to the point that they no longer function. The brass bells on the tower roof, which had chimed on the hour and half hour, have ceased to ring.

A professional clock-restoration company would be hired to install state-of-the-art clocks and bell ringers. At the same time, the company will adhere to strict historic design and requirements — using the existing clock dials, hands, bell, bell hammer, and motion works. The new apparatus will be hooked up to the current shafts and gears that run the hands of the clocks. An electrical bell hammer will also be installed. The current clock mechanisms will be removed from the tower in order to preserve them in the museum.

Who will care about these clocks? It’s not surprising that local residents look for the Armory clocks, not necessarily just to tell time, but even more importantly, to appreciate this beautiful historic building right here in their home. The site, which is one of the significant symbols on the City of Springfield’s seal, connotes pride in Springfield’s present and past.

Tourists, particularly those who travel on the highways, will easily be able to locate and identify the Armory from a distance. These clocks will serve as the Armory’s unique advertisement for visitors to reach this historic destination site. So many visitors enter the museum now with comments like, “Do you know your clocks aren’t working?” Yes, we know, and we want to finally do something about it.

The total cost is $12,000, of which $2,000 has been raised through a donation from Smith & Wesson Corporation, as well as a pledge of $5,000 from an individual who wishes to donate in memory of her father who had worked at the Armory during WWII. The Springfield Preservation Trust has recently made a donation towards the restoration of these historic clocks.Donations are tax-deductible. Checks may be written to Springfield Armory Alliance, One Armory Square, Suite 2, Springfield, MA 01105. For information, please email shera_cohen@partner.nps.gov or call 413-271-3982.